About The New Century Cinema 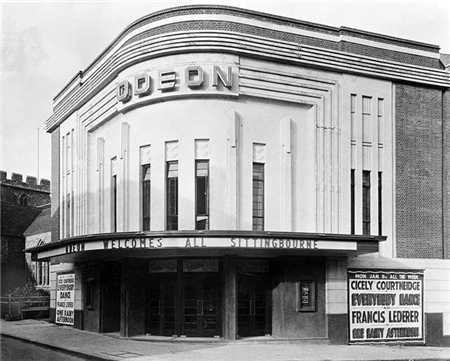 Designed by architect F.C. Mitchell for the A.E. Abrahams chain, it was taken over by the Oscar Deutsch chain of Odeon Theatres Ltd. and opened as the Odeon on 4th January 1937. The opening film was Freddie Bartholomew in "Little Lord Fauntleroy".

The cinema has a corner entrance with a curved facade with five narrow windows allowing light into the circle foyer/restaurant area. The auditorium was quite plain, and the only decoration was a decorative grille on each side of the square proscenium and a double trough in the ceiling, which contained concealed lighting. Seating was provided 1,593, with 1,077 in the stalls and 516 in the circle.

The Odeon was sold to Classic Cinemas in December 1967 and was re-named Vogue Cinema. It closed on 13th January 1968 with a childrenʼs matinee performance, the main feature being the 1948 film "My Dog Rusty" starring Ted Donaldson. The building was converted into a Vogue Bingo Club.

On 9th January 1971 a 111-seat Classic Cinema opened in what had formerly been the restaurant and in 1972 a 300-seat screen opened in the former circle. The stalls area remained in use as a bingo club. Mecca Leisure purchased the building and operated a Mecca Bingo Club in the downstairs area, and the cinemas were leased to the Cannon Group and re-named Cannon.

However this was not to be, as the New Century Cinema was closed on 26th February 2009. A planning application for a £1.5m Nightclub conversion was sought in 2010, despite receiving Council officerʼs recommendations the planning committee refused to grant change of use. The appeal was subsequently withdrawn when the planning inspector indicated it should go to public inquiry.

Now reopening in December 2014 with state of the art 2k digital projectors, new bigger screens and 5.1 Dolby audio. The future is looking great for Sittingbournes only dedicated Cinema. The New Century Cinema will be bringing a wide choice of blockbuster movies and confectionary at affordable prices to the local areas of Swale and the town of Sittingbourne.

Amusing Alternatives: Here we take an alternative look at some of the more popular films...

Alien
Ships Captain - If any of you lot put your heads over those pods, you'll be shot and not taken back on the ship. THE END

Braveheart
Aye Willy, we are bound to win if we show England our bottoms!

UP
Shopkeeper - 700,000 balloons would cost about 25,000 dollars and you'ld probably be shot down as a terrorist attack. You could go with American Airlines Economy Class for 650 pounds return. THE END

Mama Mia
Sophie - I really dont have a clue who my father is. It could be one of three men.
Jeremy Kyle - The DNA results are in... and the your father is... Harry Bright. THE END

Citizen Kane
Charlie Foster Kane - Rosebud, Rosebud... agghhh (Kane Dies...)
Housekeeper talking to reporter - That would be the old sledge hanging up in the Garage.

Lord of the Ring
Gandalf - What are you doing today Bilbo Baggins?
Bilbo - Just sending this old ring to - webuyanygold.com
Gandalf - It will be melted down for scrap...
Bilbo - Not my problem THE END

The Blues Brothers
Mother Superior - We need 5000 dollars to save the Orphanage
Elwood - I've got some money saved up in an instant access cash ISA - will a cheque do?
Mother Superior - That'll do nicely. THE END

Planet of the Apes
Taylor (Talking to the Chimps) - Hey little dudes, we've got a statue just like that on the planet I come from. Ours is in better shape though. Anyone got a welding kit? THE END

Home Alone
Harry (On the phone) - Is that social services... Good - can you get someone around immediately to number 2034 Maine. Kevin McCallister needs to be taken into care until his parents return from Paris.
Marv - Nice one Harry

Alice in Wonderland
Alice's Dad - Have you been drinking the Toilet Duck again? THE END

Despicable Me
Despicable Me is about a single Eastern European criminal type who convinced the local social services that he would be an ideal foster parent for 3 cute young orphan girls. He also has a team of workers called the Minions whom he pays considerably less than the minimum wage.

A spokesperson for Social Services commented "There are lessons to be learnt here, but I wont resign-they always are and the never do.